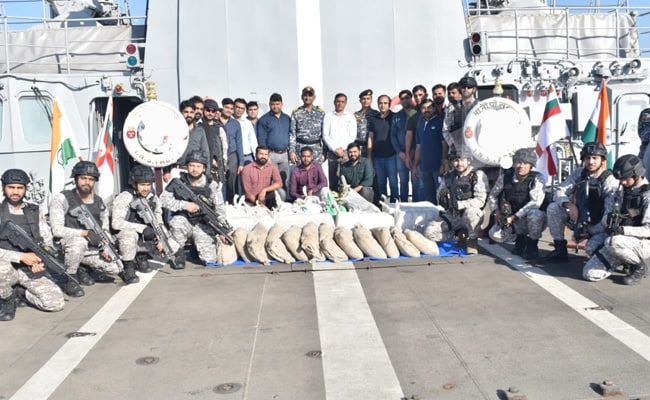 The Narcotics Control Bureau (NCB) on Saturday said it has seized over 763 kg of drugs, worth about Rs 2,000 crore in the international market, from the high seas on the western flank of the country in a joint operation with the Navy.

The seizure includes 529 kg of “very high quality hashish (charas)”, 234 kg of the “finest quality of crystal methamphetamine” and some quantity of heroin, the federal anti-narcotics agency said in a statement.

“This is the first such operation in which the apprehension has been made in high seas. The input regarding trafficking of drugs in high seas was developed by NCB and shared with Naval intelligence unit, leading to a joint operation,” it said.

The catch is stated to have been made along the country’s western coast and the consignment, packed in multiple bags, has been brought to the Porbandar coast in Gujarat.

Officials did not immediately say the exact location from where the vessels carrying the narcotics were intercepted by the NCB and the Navy personnel, citing “security reasons”.

The estimated value of the drugs seized is Rs 2,000 crore in the international market, the NCB said.

“The present seizure has dealt a telling blow to drug syndicates based out of our neighboring country and using maritime route for proliferation of drugs in India and other countries,” it added.