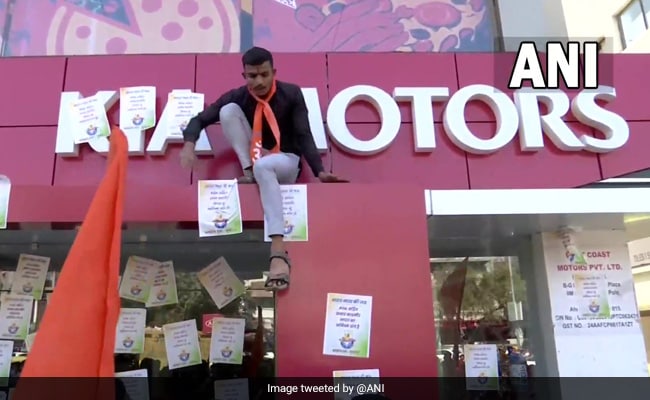 “They should issue an apology saying that Kashmir is an integral part of India,” said a protester.

“They should issue an apology saying that Kashmir is an integral part of India, only then we will forgive them,” Jvalit Mehta, North Gujarat convener of Bajrang Dal told ANI.

Earlier, a Delhi-based lawyer filed a complaint against Hyundai India, KIA India, KFC India and Pizza Hut India and submitted a request to Minister of Corporate Affairs (MCA) and Delhi Police to de-register these companies and lodge an FIR against the said companies for the alleged offense of challenging the sovereignty of our country.

Complainant Lawyer Vineet Jindal states that the said companies have recently posted on their social media account offensive statements and posts challenging the sovereignty of our country.

Meanwhile, Hyundai Motor expressed deep regrets over the offense caused to Indians due to an “unauthorized” tweet on Kashmir from the official account of the Pakistan Hyundai.

“As a business policy, Hyundai Motor Company does not comment on political or religious issues in any specific region. Therefore, it is clearly against Hyundai Motor’s policy that the independently-owned distributor in Pakistan made unauthorized Kashmir-related social media posts from their own accounts,” read the statement issued by South Korea’s company on February 8.

The company further said that “once the situation was brought to our attention, we made the distributor acutely aware of the inappropriateness of the action. We have since taken measures to ensure the distributor, which misused the Hyundai brand identity, has removed the social media posts and we have put in place processes to prevent a future recurrence.”

Half a dozen other companies, including KFC, Pizza Hut, Dominos and Kia, have also issued public apologies for unauthorized social media posts by their Pakistani partners.

Pakistan has designated February 5 as a national holiday in order to “express solidarity” with the Kashmir separatist movement. Since its launch in 1990, anti-India groups and individuals have used Kashmir Day to convince the people in the union territory and incite violence.