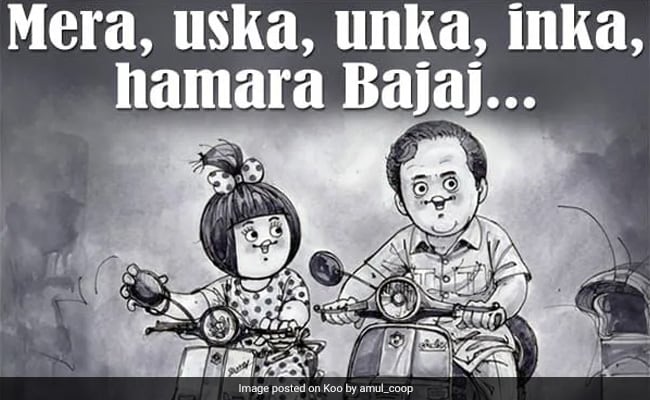 Popular dairy brand Amul paid an emotional tribute to veteran industrialist Rahul Bajaj, who died on February 12. Amul shared a monochrome doodle of the head of the Bajaj group on Koo with the message, “Mera, uska, unka, inka, hamara Bajaj…” Amul captioned the post, “#Amul Topical: Tribute to one of India’s most dynamic and respected industrialists.”

On February 12, a statement from the Bajaj Group said that the industrialist, who had not been keeping well for some time, had died in the “presence of his closest family members”.

In April last year, Rahul Bajaj had resigned as the chairman of Bajaj Auto. He was, however, named Chairman Emeritus of the company for a five-year term. The company came up with some of India’s most well-known taglines. “You just can’t beat a Bajaj” and “Hamara Bajaj” are two of the most popular ones.

Amul paid tribute to Lata Mangeshkar in a black-and-white doodle a few days ago, when she breathed her last on February 6. The caption of the doodle, which depicted Lata Mangeshkar at various stages of her life, read, “Hum jahan jahan challenge, aapka saaya saath hoga, Lata Mangeshkar was depicted in one of the images as a child. She was shown playing tanpura in another doodle. In the third image, she was shown standing in front of a microphone and singing.

Through another topical earlier this month, Amul paid tribute to veteran actor Ramesh Deo who died On February 2. He was known for acting in films such as Anand and my Apne among others.

Through its topicals, Amul has commented on almost every development in India. Keep them coming, Amul!