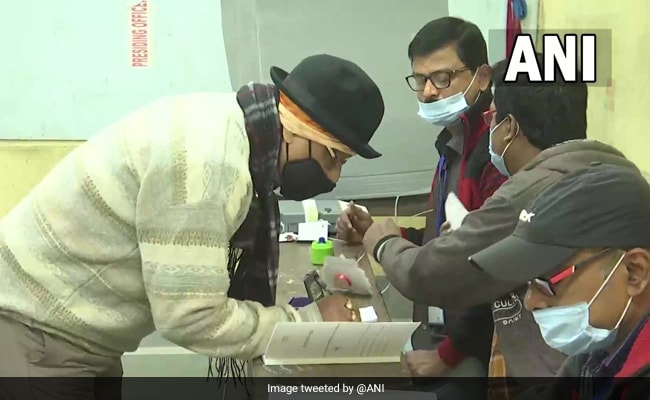 West Bengal civic polls: The counting of votes will be held on February 14.

Polling for elections to municipal corporations of Bidhannagar, Asansol, Siliguri and Chandernagore in West Bengal remained peaceful, barring a few incidents of clashes among workers of the ruling Trinamool and the opposition camps, even as an average voter turnout of 60.64 per cent was recorded till 3 PM of Saturday, an official said.

The voting for elections to the four civic bodies began at 7 AM.

“Polling has so far been peaceful. We have taken a note of some disturbances from these municipal corporation areas where outsiders were found standing in voters’ queue,” the senior official of the West Bengal State Election Commission said.

A voter turnout of 62.64 per cent was registered in Bidhannagar Municipal Corporation till 1 PM, while the percentage in Siliguri, Asansol and Chandernagore were 61.67, 61.44 and 56.82 respectively, he said.

“BJP candidates Subhasish Das and Biswajit Mondal in Siliguri have been detained by the police for their alleged involvement in creating problems outside polling booths,” the SEC official said.

The police have made elaborate security arrangements in all the four municipal areas situated in different parts of the state for the peaceful conduct of the polls, he said.

He also stated that outsiders were detected in voters’ lines in two wards of Bidhannagar and one in Siliguri.

Asked about a firing incident in Asansol civic body area, the official said the commission has not received any such complaint though the SEC is looking into it.

The opposition BJP accused the Trinamool of bringing people from outside the Bidhannagar Municipal Corporation area and engaging them in “proxy voting”.

The CPI (M) alleged that Trinamool Congress workers attacked its polling agent inside a booth in Jamuria area within the Asansol Municipal Corporation limit, though the ruling party termed it as baseless.

BJP leader Jitendra Tiwari claimed that his election agent was stopped from entering a booth by the Trinamool workers, though the Mamata Banerjee-led party denied the allegation.

There are 120 aspirants for 33 wards in Chandernagore, and 430 candidates are contesting in 106 wards in Asansol.

The counting of votes will be held on February 14.

In the 2015 elections, Siliguri was won by the Left Front, while the Trinamool secured the three other municipal corporations. Polls to these civic bodies, along with more than 100 others, were postponed due to the Covid-19 pandemic situation.