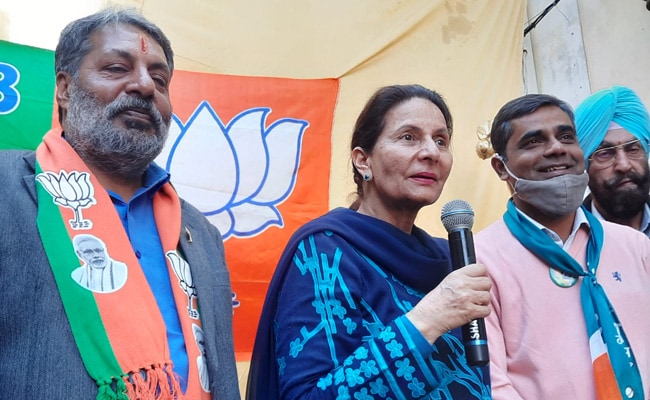 The move of Preneet Kaur has raised speculations about her next political step.

Congress MP Preneet Kaur on Saturday attending a meeting of the BJP here and sought votes for her husband Amarinder Singh in the Punjab assembly polls.

Amarinder Singh had floated his own party Punjab Lok Congress (PLC) after he was unceremoniously removed as the chief minister by the Congress high command last year following a bitter tussle with the party’s state unit chief Navjot Singh Sidhu.

Ms Kaur, the MP from Patiala, attended the BJP’s meeting, which had been organized for the saffron party’s ally Amarinder Singh.

Amarinder Singh-led PLC, the BJP and the SAD (Sanyukt) are fighting the state polls in alliance.

The former chief minister is contesting the elections as Punjab Lok Congress nominee from his traditional seat Patiala (Urban).

Saturday’s meeting was organized at Sirhindi Gate. “I have come to you to appeal for Amarinder Singh as your family member,” Ms Kaur said, seeking votes for her husband.

The move of Preneet Kaur, who has been staying away from campaigning for the Congress, has raised speculations about her next political step.

A few days ago, Congress nominee from Patiala (Urban) Vishnu Sharma had asked Kaur to either campaign for the party or resign.

“I am with my family. The family is above everything,” Ms Kaur had said on Thursday when reporters asked her why she was “silent” during the elections.

The Congress had in November last year issued her a show-cause notice seeking an explanation from her for alleged “anti-party activities”.

When asked about it, Kaur had told reporters on Thursday that she did not receive any such notice and had only read about it in newspapers and on social media.

The notice should otherwise have come from the party general secretary, she had said.