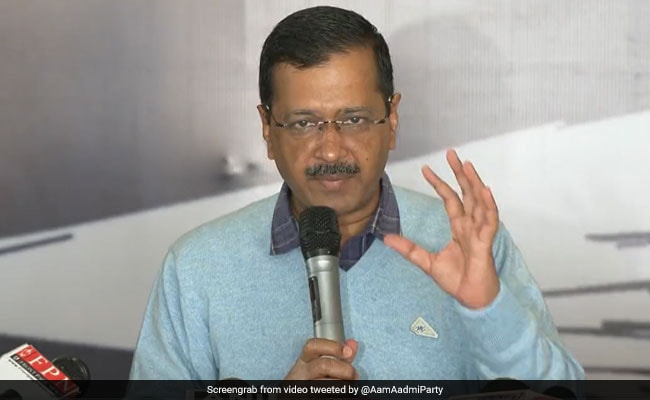 Arvind Kejriwal has urged voters to bring AAP to power with full majority.

Delhi Chief Minister and Aam Aadmi Party (AAP) national convener Arvind Kejriwal on Sunday appealed to the people of Goa and Uttarakhand to vote for his ‘new’ party, a day ahead of Assembly elections, promising to deliver welfare and development-related work.

Speaking to ANI, Mr Kejriwal said, “In Uttarakhand, Congress and BJP ruled for 10 years each. In Goa, Congress was in power for 27 years while BJP for 15 years. Both Congress and BJP have only looted the people of Goa and Uttarakhand . If you vote for them again, they will continue looting you. This time a new party-AAP is there. We will deliver on welfare, development-related works. Give AAP a chance.”

Citing development works done in Delhi in various sectors including education, health and power, Mr Kejriwal promised to deliver the same in both the states, if voted to power.

In Uttarakhand, Mr Kejriwal promised to establish healthcare services and schools in all villages of the hilly state. He also assured that if his party forms the government in the state, they would increase employment opportunities to halt migration of youth from the state in search of jobs.

“To the people of Uttarakhand, I want to say that AAP will bring adequate employment opportunities so that migration stops. We will generate jobs that will be sufficient for the youth living here and the ones who have migrated…We aim to bring all of them back,” he said.

Similarly in Goa, besides schools, hospitals and increasing employment opportunities, Mr Kejriwal said that his party will begin mining within six months, give land rights and promote tourism.

“AAP is promising the people of Goa that we will begin mining in 6 months (after coming to power, if elected)…Mining stopped for 10 years under the BJP government, so no point in voting for them. Vote for AAP, give us a chance,” the AAP national convener said.

Heaping praises for Chief Ministerial candidate in Goa, Amit Palekar, Kejriwal said that he is an “honest man” and does not involve in corruption. For the party’s Uttarakhand CM candidate, Col (Retd) Ajay Kothiyal, Mr ejriwal said that after retirement, Kothiyal trained 10,000 children and got them admitted to the Army.

Taking a dig at Congress, he said that those not in favor of the BJP should vote for AAP as all Congress leaders will join BJP after results.

“After results are announced on March 10, by March 11 all from Congress will join BJP. So I appeal to the people of Goa who want to see the BJP lose, don’t vote for Congress. Their vote will go wasted, it will go to the BJP. Give all your votes to AAP,” he said.