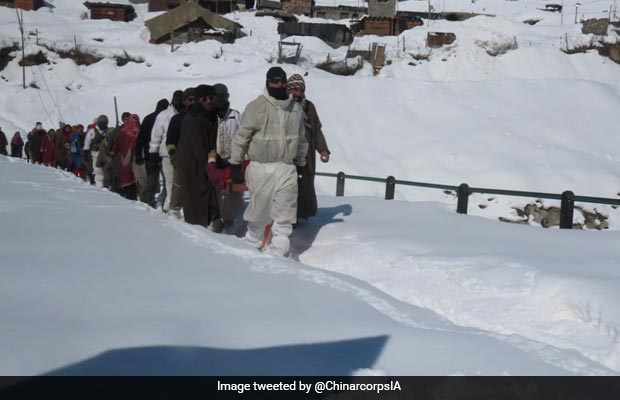 The Indian Army’s Chinar Corps warriors on Saturday evacuated a woman from Baraub area of ​​Bandipur district of Jammu and Kashmir and carried her to a helipad crossing a long stretch of snow on Saturday.

“Chinar warriors along with Civil Helicopter Services and Block Medical Office, Dawar, evacuated Fazali Begum, from Baraub and carried her on stretcher for 1.5 km in snow till helipad. She was further shifted to Bandipora District Hospital,” tweeted Chinar Corps.

#Chinarwarriors along with Civil Helicopter Services & Block Medical Office, Dawar, evacuated Mrs Fazali Begum W/o Abdul Kabir Nayak from Baraub & carried the lady on stretcher for 1.5 km in snow till helipad. She was further shifted to #Bandipora District Hospital.#kashmirpic.twitter.com/rYkZPFLncL