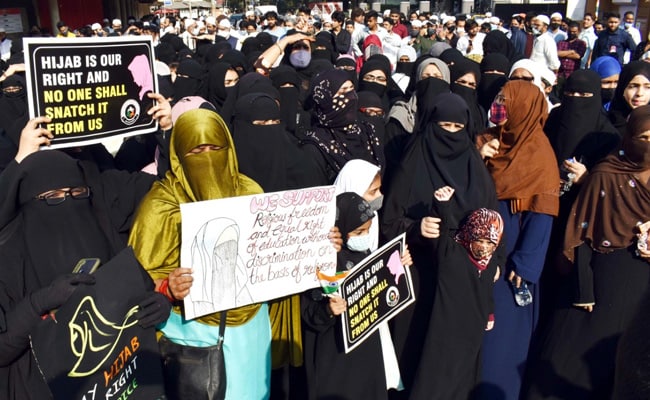 Amid a global uproar on the hijab row, India today said that motivated comments on internal issues are not welcome. Muslim students in several Karnataka colleges are demanding that they be allowed to attend classes wearing a hijab.

External Affairs Ministry spokesperson Arindam Bagchi said that those who know India well would have a proper appreciation of the realities.

“A matter regarding dress code in some educational institutions in the State of Karnataka is under judicial examination by the Hon’ble High Court of Karnataka. Our constitutional framework and mechanisms, as well as our democratic ethos and polity, are the context in which issues are considered and resolved,” Mr Bagchi said in a statement.

“Those who know India well would have a proper appreciation of those realities,” he added.

Our response to media queries on India’s reaction to comments by some countries on dress code in some educational institutions in Karnataka:https://t.co/Mrqa0M8fVrpic.twitter.com/pJlGmw82Kp

Mr Bagchi’s response came when asked by the media about comments by some countries on dress code in some educational institutions in Karnataka.

Yesterday, a US government body that monitors and reports on religious freedom abroad had Karnataka,

Rashad Hussain, the Ambassador at Large for International Religious Freedom, or IRF, tweeted “hijab bans in schools violate religious freedom”, referring to the controversy in Karnataka that has prompted the state government to keep schools and colleges shut till the high court completes looking into petitions on the hijab ban.

The hijab row started in Karnataka in December-end when a few students of a government pre-university college in Udupi who attended classes wearing headscarves were asked to leave the campus.

The matter then spread to different parts of the state, with youngsters, backed by right-wing outfits, responding by wearing saffron scarves.

With the protests taking a violent turn at some places earlier this week, the state government on Tuesday declared a three-day holiday for the institutions.