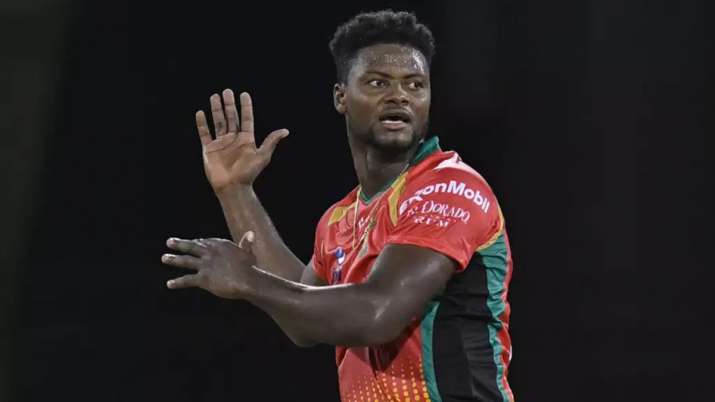 SRH made a late entry into the bid for the 27-year-old Guyanese all-rounder after Chennai Super Kings and Mumbai Indians made furious bids to take the cost past Rs 3 crore. Rajasthan Royals then joined the battle while MI and CSK exited before SRH reigned supreme.

Earlier in the day, Liam Livingstone, base price Rs 1 crore, broke the bank as Punjab Kings roped in the English all-rounder for Rs 11.5 crore after bidding wars with KKR, CSK and Gujarat Titans.

At the time of writing this copy, England all-rounder Jofra Archer, who is uncertain for the season, attracted a handsome sum of Rs 8 crore by Mumbai Indians.

He was joined in by Singapore’s Tim David at the franchise at a bigger sum of Rs 8.25 crore.

West Indies’ bowling all-rounder Odean Smith (base price Rs 1 crore) had a big payday as well as he was wrapped up by Punjab Kings for Rs 6 crore.

South Africa’s young lanky pacer Marco Jansen, who had an impressive series against India recently, was sold for Rs 4.2 crore to Sunrisers Hyderabad.

Delhi Capitals got busy during the bowler’s auction as they wrapped up Indian duo Khaleel Ahmed and Chetan Sakariya for Rs 5.25 crore and Rs 4.20 crore respectively.

All-rounder Shivam Dube, who was sold for Rs 4.40 crore at the last auction by Rajasthan Royals, went to CSK for Rs 4 crore.

Sandeep Sharma, meanwhile, went back to Punjab Kings for base price of Rs 50 lakh.

Indian veteran batter Ajinkya Rahanemeanwhile, was sold to Kolkata Knight Riders at the base price of Rs 1 crore.

However, it was K Gowtham, who saw his value shrink the most as he was sold for Rs 90 lakh (base price Rs 50 lakh) to Lucknow Super Giants after getting limelight with a Rs 9.25 crore acquisition by CSK last season.

Among other Indian pacers, Ishant Sharma (base price Rs 1 crore) found no takers while Navdeep Saini went to Royals for Rs 2.60 crore. Jaydev Unadakat, meanwhile, was roped in by Mumbai Indians for Rs 1.30 crore.

Among uncapped batters, only UP’s Rinku Singh and Punjab’s Manan Vohra found takers. Rinku returned to KKR for Rs 55 lakh while Vohra was wrapped up for the base price of Rs 20 lakh by LSG.

However, other U19 stars, including captain Yash Dull, had a happy day. Dhull went to Delhi Capitals for Rs 50 lakh while all-rounder Rajvardhan Hangargekar was sold for Rs 1.5 crore to CSK. All-rounder Raj Bawa made the most as he was bought for Rs 2 crore by his local franchise Punjab.

In the overseas segment, Aiden Markram was the first player to sold in the day for Rs 2.6 crore to Sunrisers Hyderabad, who endured a battle with Markram’s former franchise Punjab Kings and then Mumbai Indians.

Windies all-rounder Dominic Drakes, base price Rs 75 lakh, was sold to Gujarat Titans for the same amount as Mandeep.

Titans were not done in the morning as they went on a shopping spree with the purchases of Indian all-rounders Jayant Yadav (Rs 1.7 crore) and Vijay Shankar (Rs 1.4 crore) in quick succession.

Among other big earners, Australian all-rounder Danil Sams was bought for Rs 2.6 crore by MI while Windies big-hitter Sherfane Rutherford was sold for Rs 1 crore.

In the second accelerated segment, Australia’s Sean Abbot was bought by Sunrisers Hyderabad for Rs 2.40 crore.

Windies pacer Alzarri Joseph went for the same amount to Gujarat Titans while Australia’s Riley Meredith went to MI for base price of Rs 1 crore.