Kartik Aaryan, who was last seen in Bhool Bhulaiyaa 2 opposite Kiara Advani, is currently shooting for his upcoming film ‘Satyaprem Ki Katha.’ The two actors will again be sharing the screen space in the romantic saga. Recently, Kartik shared a glimpse from the sets of Sameer Vidwans’ directorial. Taking to Instagram, the ‘Dhamaka’ actor shared a picture on his story which he captioned, “Night shoots like these.” 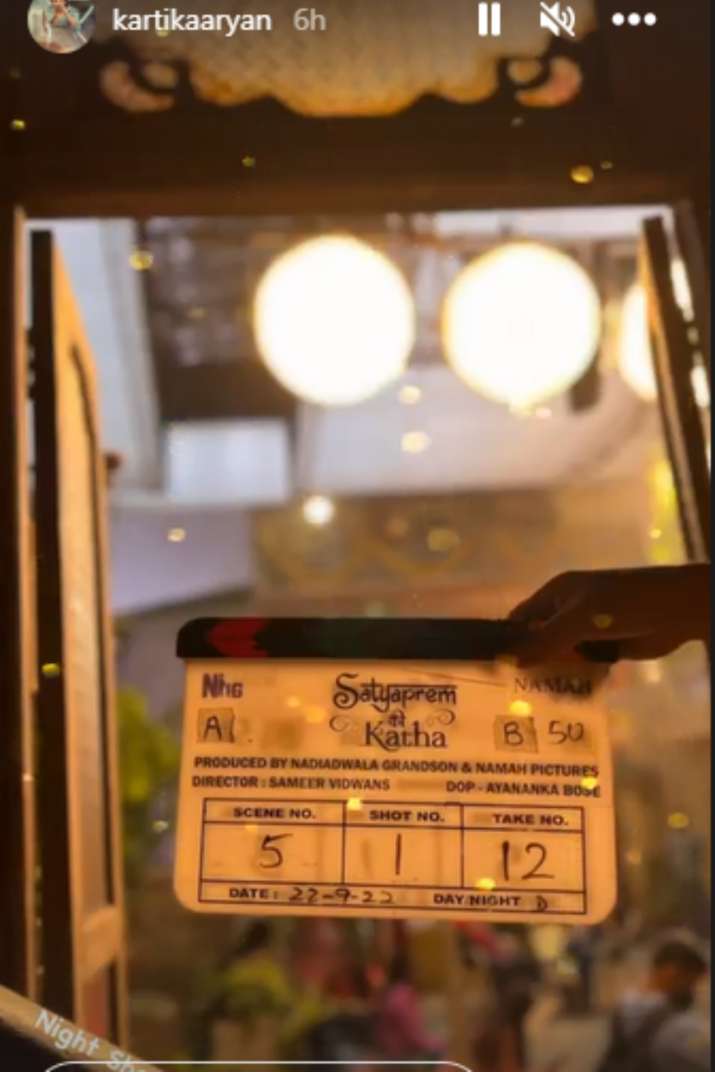 ‘Satyaprem Ki Katha’ marks the second collaboration of Kartik and Kiara after their blockbuster hit horror comedy film ‘Bhool Bhulaiyaa 2’. Helmed by Sameer Vidhwans, and produced by Sajid Nadiadwala, the film is all set to hit the theaters on June 29, 2023. The film will face a big Bollywood clash with Ayushmann Khurrana and Ananya Panday‘s upcoming comedy film ‘Dream Girl 2’.

Recently, On the occasion of Kiara’s birthday, actor Kartik revealed that the name of his upcoming project ‘Satyanarayan Ki Katha’ has been changed to ‘Satyaprem Ki Katha’.

The film sparked controversy due to its title ‘Satyanarayan Ki Katha’, which translates to the story of Satyanarayan, which is another name for the Hindu god Vishnu. Last year, director Sameer Vidwans issued a statement to announce the change in title. ALSO READ: Aamir Khan’s daughter Ira engaged to beau Nupur Shikhare; Shares dreamy proposal video

The ‘Luka Chuppi’ actor also reposted the statement on his official Instagram account which said that the title will be changed to avoid hurting sentiments, even if that’s purely unintentional. “The title of the film is something that emerges organically through the creative process. We have taken a decision to change the title of our recently announced film ‘Satyanarayan ki Katha’ to avoid hurting sentiments, even if that’s purely unintentional. and the creative team are also in complete support of this decision. We will be announcing a new title for our love story in due course of our journey. Sincerely, Sameer Vidwans,” the statement read.

Apart from this, Kartik will be seen in ‘Shehzada’ opposite Kriti Sanon, The film is helmed by David Dhawan’s son Rohit Dhawan and is slated to release on February 10, 2023. Apart from that, he will be sharing the screen space with Alaya F in ‘Freddy’. Produced by Ekta Kapoor, the film is touted to be a romantic thriller. He also has Hansal Mehta’s ‘Captain India’ in his kitty. Bankrolled by Ronnie Screwvala and Harman Baweja, the film revolves around India’s most successful rescue operations from a war-torn country. ALSO READ: Sonam Kapoor-Anand Ahuja’s baby boy’s name has connection with Anil Kapoor

On the other hand, Kiara will be next seen in ‘Govinda Naam Mera’ alongside Vicky Kaushal and Bhumi Pednekar.