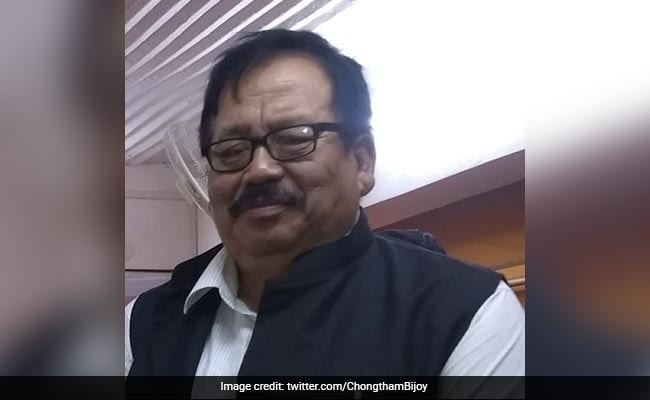 The Manipur BJP leader said he was not nominated from Uripok as he is fighting against corruption. (File)

The Manipur BJP has its chief spokesperson, Chongham Bijoy Singh, for six years for violating the party’s rules and regulations, days after he had called the National People’s Party (NPP) a “parasite that had proved a menace” to the ruling coalition in the past five years.

After his expulsion from the saffron camp, Mr Singh said he would support JD(U) candidate from Uripok Kh Suresh in the upcoming assembly elections as he wanted to contest the polls from there.

He said the BJP did not nominate him from the assembly segment as he is fighting against corruption.

“I was denied a party ticket as I was vocal against corruption. I was without serving any show-cause notice. The expulsion was due to the vested interest of the state president. I will support Janata Dal (United) candidate in Uripok, ” he told reporters on Friday.

The BJP nominated L Raghumani, a retired bureaucrat, from the constituency.

According to a statement issued by BJP’s state president A Sharda Devi, Mr Singh was for six years for “violation of the party’s rules and regulation and breach of discipline”.

The move came after Mr Singh had recently criticized the NPP which has been an ally of the ruling BJP in Manipur since 2017 though the two parties are separately contesting the assembly polls this time.

The two-phase elections to the 60-member Manipur Legislative Assembly will be held on February 28 and March 5.

“The BJP is indulging in use and throw culture, and it had its senior leaders after having utilized their resources for years,” Mr Singh said.