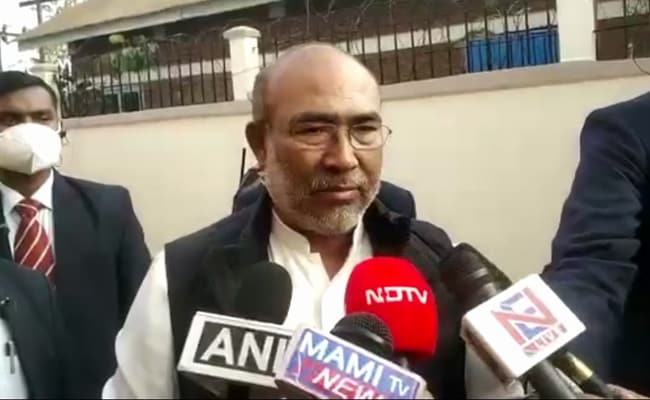 “There is no chance of a hung assembly, no question,” Biren Singh said.

With some election surveys forecasting a hung assembly in Manipur, Chief Minister Biren Singh has ruled out the possibility despite the February 28 and March 5 polls being a multi-corner fight, with regional parties like the NPP, NPF and new entrant JD(U) fielding some strong candidates.

Mr Singh said his party BJP, which faced an intense backlash within over its choices of candidates last month, has been calculative in its strategy and has focused on the winnability of its nominees. This will earn the party an absolute majority, the Chief Minister claimed.

“There is no chance of a hung assembly, no question. I am saying it will all calculations. Out of 60 seats, we have 29 sitting MLAs contesting and their winnability is very high. And with that, we just need to win 11 other seats to form the government, which we will easily achieve. This is the arithmetic we are working upon,” Mr Singh told NDTV.

He said this after launching the party’s creative campaign and vans with multimedia facilities to run digital campaigns in all 60 constituencies of the state.

While the BJP is contesting all the seats this time, the Congress is contesting 54 seats of its own and has left six for its alliance partner – the Left parties and JD(S).

The “dark horse” of this election – Conrad Sangma’s NPP is contesting 42 seats and the surprise package – JD(U) Is contesting 38 seats.

Leaders of both Congress and BJP who did not get party tickets have been fielded by smaller parties and can run away with the votes of both the BJP and Congress. In the hill areas, the NPF is contesting 10 seats.

None of the smaller parties is in any pre-poll alliance.

“After not getting BJP tickets, a lot of our leaders were frustrated since we couldn’t give tickets to everyone. But it has been rather fortunate that most of these leaders – in 12 constituencies, to be precise – have resolved their differences,” Biren Singh said.

“Everyone wanted a BJP ticket so those who could not get one, have moved to smaller parties since they want to contest but contesting is one thing, winning polls is another. For winning polls, you need winnability and that they don’t have that since only BJP candidates have winnability factor,” Mr Singh added.

Manipur’s last election in 2017 had produced a hung assembly when the Congress won 28 seats and the BJP won 21 but cobbled up an alliance by getting the smaller parties on its side.