Pakistan openers Babar Azam and Mohammad Rizwan were at their fluent best as they bamboozled the English bowling attack to record a 10-wicket win on Thursday evening. The win also saw Pakistan level the seven-match T20I series at 1-1 as England struggled to defend a total of 199. Babar Azam remained unbeaten with 110 off 66 deliveries while Rizwan failed to score a ton and recorded 88 off 51 deliveries.

Chasing 200 runs, Rizwan and Babar showed no mercy on the English bowlers as they scored 203 in 19.3 overs. They won the contest with three balls to spare as the memories of their win over India in the T20 World Cup were refreshed. Babar brought his second hundred in T20Is, interestingly the second part of his hundred came in just 24 balls. He looks in great touch after an off Asia Cup 2022 campaign as Pakistan return back to winning ways after losing the first T20I.

After deciding to bat first by winning the toss, England made a bright start to their innings as Alex Hales (26 off 21) and Philip Salt (30 off 27) gave an opening stand of 42 runs. Last match’s hero Hales was dismissed for Shahnawaz Dahani and the Pakistani pacer was on a roll as he scalped Dawid Malan on the very next ball to be on a hat-trick. Ben Duckett, however, negotiated the hat-trick delivery and kept England away from a catastrophic start.

Duckett and Salt would then put together a partnership of 53 runs before the latter was scalped by Haris Rauf. Soon after Duckett also departed on 43 off 22 that consisted of seven fours leaving England at 101/4. 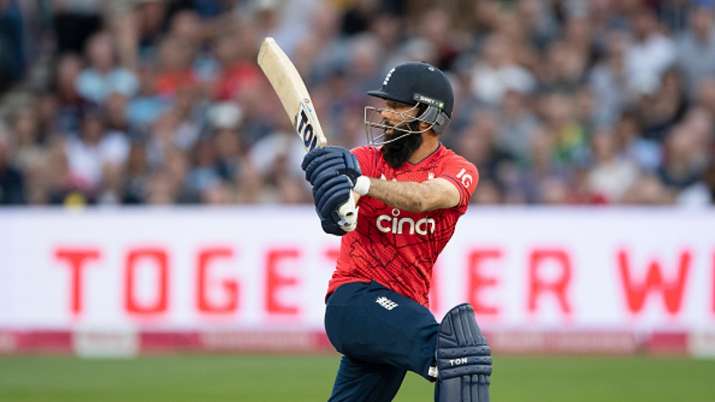 With seven overs to go Harry Brook and Moeen Ali joined hands to put England in a commanding position as both destroyed Pakistan bowlers. Brook was dismissed on 31 off 19 while Ali reached his sixth T20I fifty and remained unbeaten on 55 off 23, which consisted of four fours and four sixes. They put together a fifth-wicket stand of 59 runs.

For Pakistan, Dahani and Haris Rauf ended with two wickets each while Mohammad Nawaz picked one wicket.

“Not Fair To Say That Virat Kohli Is The Greatest Indian Captain”: Ex-West Indies Pacer Winston Benjamin To NDTV

As Indian Captain, Rohit Sharma Was Dismissed For The Most 4 Times In International Matches