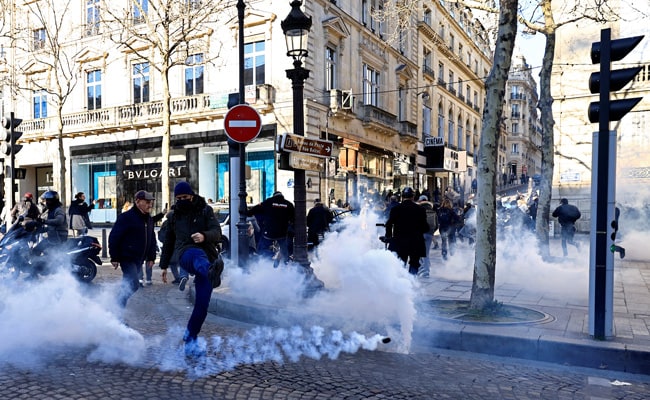 Paris police fired tear gas and issued hundreds of fines on Saturday to break up a convoy of vehicles that attempted to block traffic in a protest over coronavirus restrictions and rising living costs.

Inspired by truckers who shut down the Canadian capital Ottawa, thousands of demonstrators from across France made their way to Paris in a self-proclaimed “freedom convoy” of cars, trucks and vans.

The police, who had banned the protest, moved quickly to try to clear cars at entry points to the city, handing out fines for participation in an unauthorized protest.

Interior Minister Gerard Darmanin tweeted that officers had handed out 337 fines and arrested 54 protesters in Paris.

But more than managed to converge on the famous Champs-Elysees avenue, where police used teargas to disperse protesters in scenes reminiscent of the “yellow vest” anti-government riots of 2018-2019.

The demonstrators oppose the Covid vaccine pass required to access many public venues but some also took aim at rising energy and food prices, issues which ignited the “yellow vest” protests that shook France in late 2018 and early 2019.

Aurelie M., a 42-year-old administrative assistant from Paris, that the health pass meant she could no longer take a long-distance TGV train even if she tested negative for Covid in a home test.

“There’s so much inconsistency and unfairness,” she told AFP, noting that commuters could still cram onto crowded Paris metros without proof of vaccination.

Sixty-five-year-old factory worker Jean-Paul Lavigne said he had traveled in from the southwestern town of Albi to protest not just the pressure to get vaccinated, but also fuel, food and electricity price hikes.

Across the rest of the capital, more than 7,600 other people also protested against the vaccination pass, the interior ministry said.

The demonstrations come two months before presidential elections, in which President Emmanuel Macron is expected to seek re-election.

On Friday, the centrist French leader, a figure of hate for the far left, said he understood the “fatigue” linked to the pandemic.

“This fatigue also leads to anger. I understand it… But I call for the utmost calm,” he told the Ouest-France newspaper.

Nearly 7,200 officers equipped with armored vehicles and water cannon were deployed to keep the peace in Paris.

The convoys set out from Nice in the south, Lille and Vimy in the north, Strasbourg in the east and Chateaubourg in the west.

They are demanding the withdrawal of the government’s vaccine pass and more help with their energy bills.

“People need to see us, and to listen to the people who just want to live a normal and free life,” said Lisa, a 62-year-old retired health worker traveling in from Chateaubourg, who did not want to give her surname .

Paris police banned the gathering, saying it posed a threat to public order.

The order prohibiting the assembly of convoys was upheld on Friday by the courts, which rejected two appeals.

“It’s a betrayal. The basis of the order is not respectful of the law, of the freedom to demonstrate,” anti-vaccine and “yellow vest” activist Sophie Tissier told AFP.

The prime minister defended the clampdown.

“The right to demonstrate and to have an opinion are a constitutionally guaranteed right… in our democracy. The right to block others or to prevent coming and going is not,” he said.

Some 24,000 more people demonstrated in other parts of the country, the authorities said, including in the southern city of Montpellier, where radical fringe activists broke the glass facades of two banks.

From Paris, some of the protesters plan to travel on to Brussels for a “European convergence” of planned there for Monday.

Belgium has banned that event too, and its Prime Minister Alexander de Croo has urged would-be attendees to “go and protest in your own country”.