Pre Monsoon Rain in Rajasthan: Many districts of Rajasthan are witnessing rain due to the knock of pre-monsoon. After scorching heat and heatweb in Pali district, pre-monsoon clouds rained heavily in Godwara Marwar. Due to the rain, the river drains also got filled with water. The first pre-monsoon rains have seen flowing water in the rivers passing through the tribal areas of Kakradi and Koyalvav after two years. People saw the happiness of pre-monsoon
According to the Meteorological Department, the monsoon will enter the state soon, in such a situation, if the pre-monsoon rain continues like this, then after filling the water, these rivers will go to the Jawai Dam, which has reached the verge of drying up these days. Due to which there is a huge water crisis in Pali district.

Local people are considering the filling of river drains by this pre-monsoon rain as an auspicious sign. People have got some relief from the heat and heat, however, not only Pali, the weather has changed in many districts of the state. According to Jaipur Churu Sikar Nagaur Bikaner Jodhpur Ajmer has indicated more rain in the vicinity. 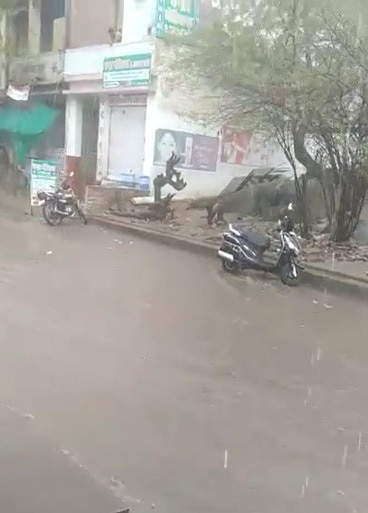