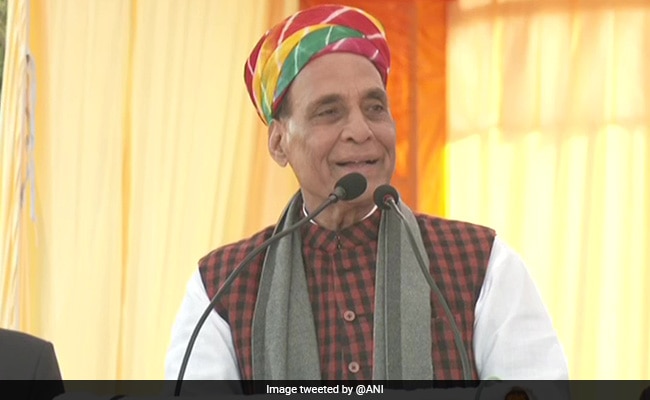 A person who indulges in politics of appeasement can never be a Samajwadi, said Rajnath Singh

Launching an attack on the Samajwadi Party, Defense Minister Rajnath Singh on Sunday said a true socialist is the one who takes every section of the society along and not those who indulge in “politics of appeasement”.

Those only speaking about ‘Samajwad’ (socialism) are ‘khote sikke’ (counterfeit coins) that cannot be used in the market, he said.

Addressing an election meeting in Ramnagar Assembly constituency here, Mr Singh said the name ‘Samajwadi Party’ and its leaders did not go well together as “merely having such a name does not make one Samajwadi”.

Explaining socialism, the senior BJP leader said, “A true Samajwadi is a person who takes everyone along. A person who indulges in politics of appeasement and attempts to form the government by dividing the society can never be a Samajwadi.”

In an apparent reference to the SP leaders, Mr Singh said, “These people who are talking about Samajwad have turned into ‘khote sikke’ and you know khote sikke are not used in the market. Today’s Samajwadi Party is not going to work in Uttar Pradesh politics.”

Terming Barabanki a bastion of socialists, he said, “When the Congress was ruling entire India, the people of this place stood with eminent socialists like Ram Sevak Yadav and Ram Manohar Lohia. But, ever since the fake ‘Samajwadis’ emerged in the state, people’s myth was broken.” He said the BJP is a party that imbibed the original essence of socialism and stayed true to it.

“We have resolved the issues of hunger and fear. Hence, I can say that they (SP) are fake socialists and we are the ones who have actually moved on the path of socialism. And if anybody dares to hurt the security of the country, then we are nationalists to give them a befitting reply,” he said.

Remembering his association with Barabanki, Mr Singh said he had been elected as an MLA from the Haidargarh Assembly constituency in the district, and “you people had made me the chief minister”.

Barabanki will vote in the fifth phase on February 27.