Taarak Mehta Ka Ooltah Chashmah: The show ‘Taarak Mehta Ka Ooltah Chashmah’, which has been ruling the TV industry for a long time, has a strong fan-following. The show has been entertaining people since 2008 and there is no doubt that each and every character is in the hearts of the audience. However, not only the audience but also Jethalal aka Dilip Joshi are deeply saddened by the return of Dayaben in the show.

The video of the latest episode of ‘Taarak Mehta Ka Ooltah Chashmah’ has surfaced, in which Jethalal looked very sad due to Dayaben not returning. When Sundar returns to Gokuldham from Ahmedabad on the show, Jethalal gets angry after not seeing Dayaben with him. Sundar assures Jethalal that he will convince his mother to send Dayaben back to Gokuldham. For this, he asks for an extension of 3 months, but Jethalal says that he will have to come not in 3 months, but in 2 months.


After this video surfaced, the fans of TMKOC are expressing their displeasure. One user said, “Actually the deadline is being given to you (the makers of the show) by the fans.” Another user wrote, “TMKOC is playing with the emotions of the fans.” One said, “Nai (Dayaben) will come. Auditions in 2 months, but they are playing with the feelings of TMKOC fans.” 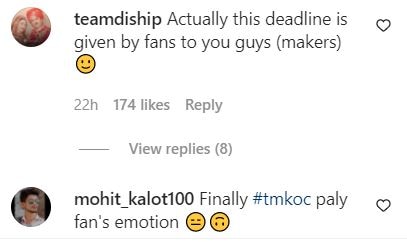 Let us tell you that Disha Vakani, who is playing the character of Dayaben in the show, has left the show. Recently, the producer of the show Asit Modi had revealed that there is no way for Disha Vakani to return to the show. She left the show after the birth of her second child. The audition is going on for the new Dayaben.

Why Raveena Tandon rejected 20 scripts before OTT debut, herself made this big disclosure

Ravi Kishan: Ravi Kishan’s daughter wants to join the army through this plan of the center, the actor himself revealed by sharing the picture