Tejashwi Yadav was at the house of his sister Misa Bharti for Raksha Bandhan.

Bihar’s Deputy Chief Minister Tejashwi Yadav celebrated Raksha Bandhan on Thursday (August 11) with her sisters and the photos are now viral. Mr Yadav reached the house of his sister Misa Bharti in Delhi to celebrate the festival with his family where his other sisters too tied the sacred thread on his hand. The festival of Raksha Bandha holds a special place in the hearts of brothers and sisters. It is a celebration of the special bond that they share.

Also Read | Told My Dad “Want To Marry Her, But She’s Christian”: Tejashwi Yadav To NDTV

“Live long and rule the hearts of the whole world. Wishing you all a very Happy Rakshabandhan,” Ms Bharti tweeted, posting the photos of Raksha Bandhan celebration at her home.

live long! Rule the hearts of the whole world!

Wishing you all a very Happy Rakshabandhan. #rakshabandhancelebrations#happyrakshabandhan2022pic.twitter.com/9IrvPSPgno

His other sister Chanda Yadav also posted a “thread of love” on the occasion, sharing more photos from the celebrations. 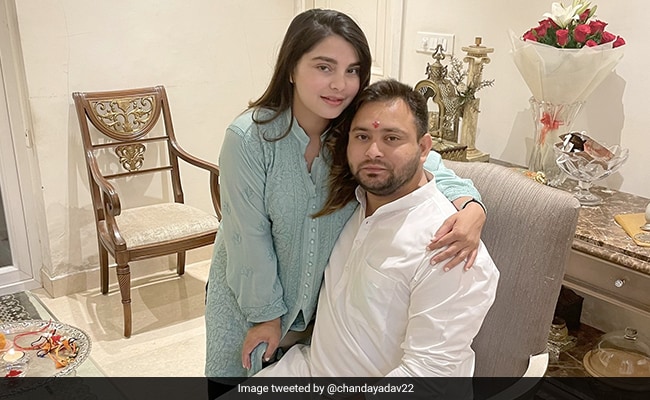 Rohini Acharya, Mr Yadav’s sister, separately tweeted congratulating him on becoming the Deputy Chief Minister. “This Raksha Bandhan has given me the gift of happiness. Brother got the Crown,” she said on Twitter.

This Raksha Bandhan has given me the gift of happiness
Brother got the power of Bihar
Crown.. https://t.co/bGIAifeV55

Raksha Bandhan falls on Shravan Poornima or full moon day in the month of Sawan (according to Hindu calendar), sisters tie a sacred thread on the wrists of their brothers. It not only symbolizes a Raksha Sutra (bond of protection), but also brings a moment where brothers and sisters exchange gifts.

The festival is celebrated all across India following various traditions of the region.

In Maharashtra, the festival of Raksha Bandhan is celebrated along with Narali Poornima (coconut day festival). The fishermen offer prayers to Lord Varuna, the Hindu god of the Sea, to invoke his blessings. As part of the rituals, coconuts were thrown into the sea as offerings to Lord Varuna. The girls and women tie rakhi on their brother’s wrist.

In Haryana, in addition to celebrating Raksha Bandhan, people observe the festival of Salono. Salono is celebrated by priests solemnly tying amulets against evil on people’s wrists.

Delhi Woman Hospitalised After Being Attacked By Gold Chain Snatcher

Ahmedabad News: Case registered against AMC officer in Ahmedabad for culpable homicide not amounting to murder, know what is the whole matter?