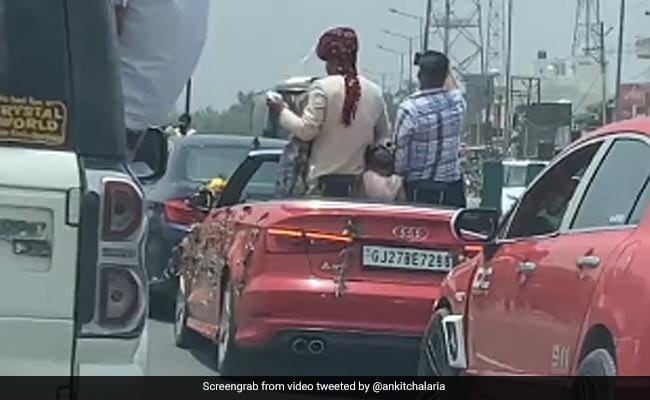 The stunt was pulled off on the Muzaffarnar-Haridwar national highway.

A groom’s grand wedding procession has cost him Rs 2 lakh in Uttar Pradesh. The groom, along with his friends, was seen dancing in an open roof Audi on a busy road in Muzaffarnagar in a video that has now gone viral on social media.

The clip also shows his bridal party grooving with hands up in the air and taking selfies in a cavalcade of high-end cars. Some of the men were even seen hanging out of the windows of their cars.

The stunt was pulled off on the Muzaffarnar-Haridwar national highway.

Action taken by Muzaffarnagar Police against vehicles stunting on highways.

Nine cars used in the wedding procession have been seized and a challan of Rs two lakh has imposed on the owners after a passerby’s tweet alerted the police.

Ankit Kumar shared the clip on Twitter highlighting how the stunt jeopardised the safety of fellow commuters. “During my journey from Haridwar to Noida, some people in Muzaffarnagar district were putting other people’s lives in danger for their entertainment. Hope the traffic police will take cognizance of the matter,” he tweeted.