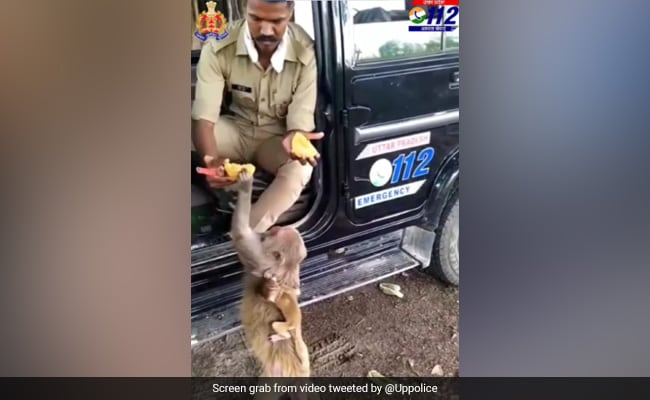 A heartwarming video showing a police constable feeding a monkey has gone viral on the internet.

On Sunday, the Uttar Pradesh police department shared a wholesome video that showed a constable in uniform sitting on the edge of his jeep, slicing mangoes to feed the monkey. On the other hand, the monkey carrying a baby on its back is seen waiting patiently. The constable then hands over the sliced ​​mango to it, following which the monkey is seen feasting happily on the juicy fruit.

Watch the video below:

Since being shared, the video has been viewed nearly 60,000 times. It has garnered over 3,500 likes and several comments too.

One internet user also pointed out that people should avoid feeding monkeys as it makes them dependent on humans. “It should be common enough sense to not feed wild animals, especially those explicitly classified as vermins! They’re a threat to life and property and by feeding them you are encouraging their behavioral patterns when amidst humans,” the user said,

Meanwhile, another adorable video created a buzz across the internet earlier this month. In the video, two monkeys were seen exchanging love in a way that seemed they were seeing each other after a long wait. They also made lip-smacking gestures – a common social behavior among monkeys that usually results in friendly interactions.