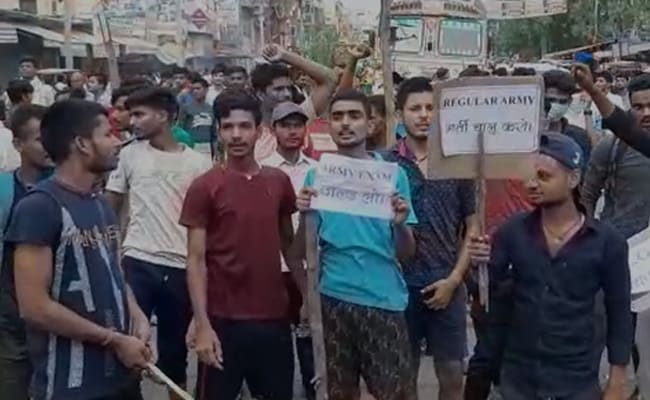 Army aspirants have been protesting, particularly in Bihar and UP, against the Agnipath scheme.

Reacting to concerns about the future of soldiers leaving the armed forces after four years under the new Agnipath scheme, the Home Ministry has announced a plan for these recruits to be hired later into the paramilitary forces. This is one of several measures announced to address concerns of the aspirants, who have been protesting ever since the scheme was announced on Tuesday.

‘Agneepath Yojana’ for bright future of youth @narendramodi A visionary and welcome decision by Mr.

In this context, today the Ministry of Home Affairs has decided to give priority to Agniveers who have completed 4 years under this scheme in the recruitment of CAPFs and Assam Rifles.#BharatKeAgniveer

Several states, including BJP-ruled Uttar Pradesh, Haryana and Assam, have said they will give preference to Agniveers (as recruits under the scheme are called) in government jobs. However, no quota percentage or other details beyond the announcement have been shared.

Agniveers who will return after 4 years of service in the Armed Forces will be given special preference in Assam Police recruitment. pic.twitter.com/5SoX1xQ2cR

Experts have been asking why the recruits would join the armed forces in the first place if they could directly build a career in Central Armed Police Forces (CAPF) or state police. Some aspirants that NDTV spoke to in Patna on Wednesday said they would now prepare for police recruitment as that has pension and other long-term prospects.

Under the Agnipath scheme, both men and women will be hired from the 17.5-21 age bracket, and only up to 25 per cent may get regular commission of 15 years after the four-year contract. Under the old system, youths aged between 16.5 and 21 years were selected directly for a minimum of 15 years of service and got pension after retirement.

One of the rationales being seen behind the Agnipath scheme is that it will reduce the salary and pension bill of the armed forces.

Protesting young men in Bihar’s Muzaffarpur and Buxar said the salary of Rs 30,000 and a payout of around Rs 12 lakh at the end of four years will leave them with few chances at starting something new. They also asked what happens to the regular recruitment that has not taken place for the past two years after a halt on account of the coronavirus pandemic. As of Thursday afternoon, protests were being held in Uttar Pradesh too.

The government has tried to address the worry that Agniveers released after four years will be lagging in terms of education. It has announced a new three-year bachelor’s degree program with lighter curriculum, in which half the credits required for the degree will come from skills received under the Agnipath scheme. Students will need to choose their remaining courses to complete their degree programme, which will be run by the Indira Gandhi National Open University. However, only the curriculum is reduced, not the number of years for the degree.

Opposition leaders have been pointing towards several provisions of the scheme and demanding its scrapping. Samajwadi Party leader and former UP Chief Minister Akhilesh Yadav said on Thursday that the scheme could be potentially “fatal” for the country’s future.

From the Congress, besides many of its state leaders, Rahul Gandhi too has said that the scheme is uncalled for in light of “the threat Indian faces on two fronts”,

no rank, no pension

No direct recruitment since 2 years

no stable future after 4 years

no respect for the army

Listen to the voice of the unemployed youth of the country, don’t take ‘fire test’ of their restraint by driving them on ‘Agneepath’, Prime Minister.

But Defense Minister Rajnath Singh has said the move will make the profile of the armed forces much younger. The army has also said the induction will be done gradually and ensure a younger and possibly more tech-savvy force.

The ‘Agnipath’ scheme approved by the CCS chaired by Prime Minister Shri @narendramodi is a truly transformative reform which will enhance the combat potential of the Armed Forces, with younger profile and technologically adept soldiers. #BharatKeAgniveerpic.twitter.com/2NI2LMiYVV

The government’s plan is to hire about 45,000 Agnivers with the first batch expected to be completed by July 2023.

Among the veterans, there has been a mixed response.

Major General BS Dhanoa (retired) sought to suggest some tweaks in a Twitter post: “Two serious recommendations to the just-announced recruitment policy for the armed forces – a. Increase the service period of new recruits to a minimum of seven years; b . Make the retention of those keen to serve longer at least 50 per cent.”

Meanwhile, Vice Chief of Army Staff Lt General BS Raju has said, “The Indian Army will recruit 25,000 Agniveers in the next 180 days and the process for recruitment of the remaining 15,000 will begin a month after that.” The recruitment drive will cover every district of the country, he added. “I think, with this scheme, we will be ready to fight the future wars.”